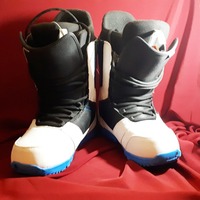 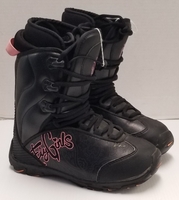 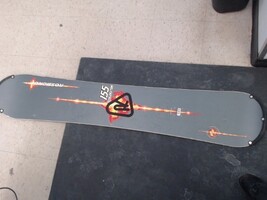 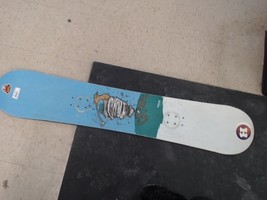 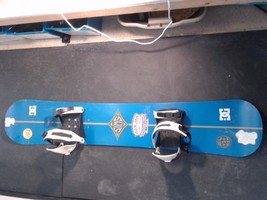 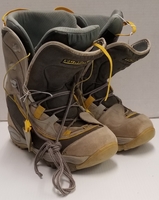 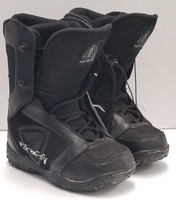 Do you ever wish you could just put a spell on your skateboard to turn it into your snowboard for the season? Well, now you don’t have to pay off that old hag on the street corner with your first born. The Gnu Street Series board is skate inspired. Street Bananas! This is an urban jib Banana board with Magne-Traction in a mid- wide, twin freestyle shape. Banana tech jibs like no other with higher ollies and deeper presses. Don’t let the name fool you though - this board also kills the pow and everything else you might encounter.
True Twin Shape with Banana-Traction: BTX: Banana Technology and Magne-traction combined – Banana is revolutionary snowboard geometry (licensed from Lib Tech) featuring a “banana” rocker between your feet and flat to the tip and tails. The middle of your board is brought to life and the ends become more catch free to float or climb through tight transitions. Magne-traction gives you better control and edge hold with multiple points of contact on your edge. Slice through any snow condition, think of Magne-traction as a serrated knife blade cutting through the snow. Sandwich construction with UHMW Sidewalls. Biaxial Glass: 2-way fiber orientation that is engineered to make the difficult easy. Mervin A.5 Core: Full Aspen core with EISS 5 edge pop. Wax Infused Base: A dual layer sintering process – the base layer of sintered material literally has One Ball Jay wax built in. New was is being exposed at the exact rate you ride.

Graphics: Featured “Street” artist for 2009 is Rich Jacobs, an internationally acclaimed artist based out of San Francisco.

Simple, comfortable, and built to last, the Burton Invader™ boot is our softest flexing option with upgrades that are all about keeping you out on the mountain as long as possible. Its feature-packed design is highlighted by Total Comfort,

The snowboard boots in this listing are in very nice used condition.  There is no box with this pair of boots.

These boots have been previously used.

They do have some signs of wear that is visible in the photos.

Burton Emerald Smalls Snowboard Boots.
They are a size 4 (U.S.)
They are white and blue.
They have been previously used.
Please see the photos.

One 139cm.
Tornado Golfing Man.
No Bindings.
Made in Italy.

These boots have been previously owned.

They do have signs of wear that can be seen in the photos.

These boots have been previously owned.

They are in good shape.